'mCrypt' PHP extension for advanced password protection is not installed on your server. Plz, ask your hosting company to install it.

When the CD format was introduced in 1982, it gave the music industry a medium with far wider dynamic range and lower distortion than the tape and vinyl that it replaced.

However, the full potential of the CD format was never realized, as it quickly became the first casualty of the so-called “Loudness War”.

The graph below displays the average PLR values of the most popular pop songs between 1963 and 2011. The PLR value is a good measure of the dynamic quality of a recording. A lower PLR value indicates that dynamic range compression has been applied. 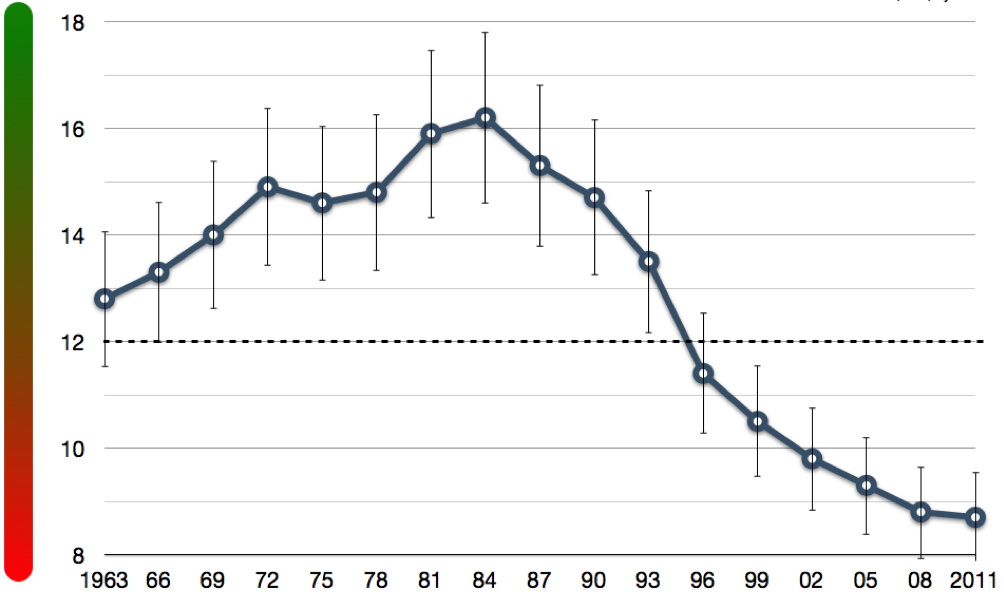 This graph illustrates how quality peaked just after the introduction of the CD in 1982. After 1984, quality has consistently declined, now reaching a much lower level than in 1963. In fact, in 2011 it was worse than in 1951 with shellac 78 RPM records!

Quality continues to decline as artists and record companies compete fiercely to make their own releases stand out from the crowd, the simplistic thinking being - The louder it is compared to all the others, the more it will be noticed.

The problem is that a recording can only be made subjectively louder by compressing dynamic range – i.e., by raising the average sound levels, while reducing the highest levels and boosting the lowest levels present in natural music.

The top of the Orange/Red indicates the perceived LOUDNESS of the tracks.

Clearly, the natural flow of shifting dynamics, musical valleys and peaks, has been disrupted. First, it was the peaks that went missing. Later, as new digital technologies allowed producers to push quiet passages up, the valleys were filled in, as well.

The perceived sound level of the 2011 track is so loud that the 1982 track, with much better sound quality, can hardly be heard in comparison.

Sound quality has suffered immensely as a consequence of the Loudness War. The audible effect is a constant barrage of sound, full throttle all the time and the fundamental rhythm, pace and variation of the music have vanished. Typically, it will be hard to distinguish between different instruments. And typically, there will be severe clipping distortion – as if your stereo is turned up way too loud.

Unfortunately, the artists are in a situation where they only have two options: Make good sound that will not be heard or make loud, compressed sound that will be heard, but in abysmal sound quality.

Heavy-handed compression may be the best choice for some heavy metal recordings, but it is a poor and in some cases devastating choice for most other musical genres.

Mark Knopfler said, ”Now we have reached a stage over the last 20 years where there is no headroom left at all. A vicious circle has come about, where clients, competing record companies and engineers have got themselves into this loudness war. And this vicious circle has actually become a death spiral (see note 1.), and there seems no really sane reason why it should exist.”

Bob Dylan was quoted in an interview:  “You listen to these modern records, they’re atrocious, they have sound all over them. There’s no definition of nothing, no vocal, no nothing, just like — static”

But even Bob Dylan had to align himself with the current state of affairs and his latest albums are all highly compressed.

So there is strong evidence that the “Loudness Wars” have limited the artistic freedom of expression. Everyone has to adhere to the current low standards, even if they desperately want to do something better.

MP3 files, data reduced interpolations of a higher quality source material, offer a trade-off between storage space/transmission speed and sound quality. MP3 files are often referred to as “compressed audio” files. But this term refers to the reduction of data – not reduction of dynamic range. MP3 files at 128 Kb/sec or higher offer the same nominal dynamic range as the CD format, but the sound quality does suffer from the data reduction.

With a dynamic range compression from a PLR of 16 dB to 8 dB the change in quality is at least 10 times greater than when a CD is converted to MP3 at 128 Kb/sec. So the Loudness Wars represent a far greater threat to sound quality than conversion to MP3.

Converting a dynamically compressed CD to MP3 introduces even more problems than when an uncompressed CD is converted. This exacerbates the issues caused by the Loudness Wars.

In 1999, Sony and Phillips jointly released the SACD format which was intended as the replacement for the CD. SACD offered greater dynamic range and wider frequency response than CD. However, very few popular recordings with significantly better sound quality were released. The problem was that almost all POP music on SACD was compressed, rendering the potential benefits of the format irrelevant.

From 2008 and onwards, various online music stores have been promoting HD Audio downloads, typically with 96KHz/24 bits resolution – which extends frequency response to 45 KHz and dynamic range to 120 dB, compared to 21 KHz and 96 dB respectively for the CD format. However, most of the popular music offered is dynamically compressed, again leaving potential benefits unexploited.

Another example is the widely publicised PONO initiative by rock Legend Neil Young. PONO will sell music files of existing and future recordings with 96 kHz and 192 kHz sample rates and 24 bits. There is no indication though, that this will be anything but the same dynamically compressed music.

Here is an example of the famous song “Diamonds on the Soles of her Shoes” by Paul Simon.

This is the original Graceland CD version from 1986 with an excellent PLR of 19.6 dB:

This is the “Re-mastered”, “HD Audio” version delivered by an online vendor in 96 KHz/24bits format. The music has been dynamically compressed to a PLR of 10.7 dB:

Conclusion: Using a better recording/delivery format does not guarantee better sound quality. So HD Audio is not in itself a solution.